This year I did my second Kopan course, it seems incredible that the first one was 13 years ago! It was like coming back home, I had so many memories of the 4 months I spent in retreat here.

Kopan is a beautiful Tibetan monastery built on a hill in Nepal, which offers a month-long course every November for Westerners, where the Lam Rim (the gradual path) is studied, a text that teaches step by step the stages on the path to enlightenment.

On this occasion I also did volunteering work as a simultaneous translator into Spanish and leader of the Spanish-speaking discussion group. Which required a lot of effort and concentration but it made me feel very happy to be able to help other beings understand the teachings.

This time I had the fortune to enjoy a single room with private bathroom and hot water, unlike my first course where I had to live in a quadruple bedroom with shared bathrooms and cold shower. This gave me the opportunity to have the necessary space to rest after each intense day of work, study and practice. In addition to being able to do my personal meditation practices very early or in the middle of the night.

The schedule was very intense, starting at 5:30 am with a meditation of purification.

At 6 we had tea in silence, watching the sunrise in the middle of a spectacular landscape, with the mountains and the view of the monastery of another of my teachers, Ayang Rinpoche, which is on the hill in front of Kopan and has a beautiful design that gives you that feeling of being in a mystical land of the East. 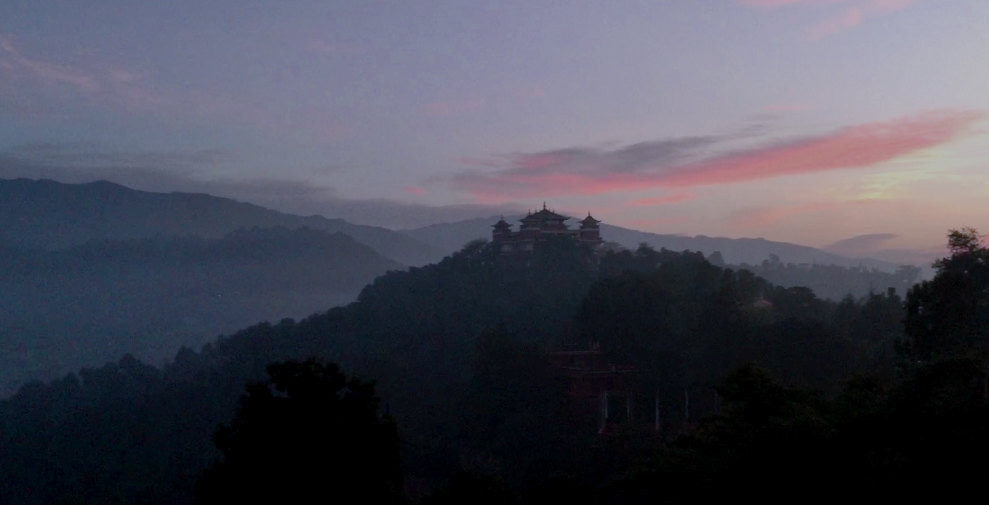 At 6:30 we had an hour of shamatha meditation, this session sometimes I rathered do it in my room, since this is a practice that I have done for years and I prefer to do it without a guide.

At 7:30 they served breakfast, usually rice porridge, white bread with peanut butter and jam. This meal was not really healthy, so I preferred to have breakfast in my room, one of the many apples I bought before starting the retreat, a couple of dried figs and a couple of almonds.

From 9-11: 30 we had teachings with Ven. Alisa, an eloquent Australian nun, whom I translated simultaneously into Spanish through a microphone while the Spanish speakers who needed translation listened on a radio frequency. This was a wonderful experience since I could not escape a word and therefore I learned a lot, topics that I had already studied but this time I could understand them a little more deeply. In addition, the challenge of improving my skills as a translator and being of benefit to other people motivated me to give my best.

After lunch we still had silence. After this, we could talk.

At 2 pm we met in a terrace or garden with our discussion group, as group leader I received a daily paper with three questions to generate and coordinate the discussion in our groups. My group had people from Peru, Colombia, Argentina, Spain and of course the Mexicans, couldn't be missing. For me it was an interesting experience to motivate the discussion, to give space for everyone to have an opportunity to speak and help clarifying a topic when it was difficult for them. All beautiful people who contributed a lot of their own inner wisdom to the group. We laughed, we learned, we comforted and supported each other for a month, and in the end we were family. I miss them!

From 3:30 to 5 p.m. there was another session of teaching and translation, the most difficult part was translating the parts in which the instructor read a book, since they were fast and sometimes there were words in a somewhat poetic English. Class themes were sometimes very difficult for students to assimilate, particularly those related to karma, rebirth and the sufferings of samsara (cyclic and conditioned existence).

Then we would do an analytical meditation on the subject of the teachings.

Many of these meditations are difficult because you have to reflect on a topic and many times we are just thinking instead of meditating. In my next guided meditations I want to touch some of these topics in some way that I can guide my students step by step until they can connect with a recognition of a certain subject in a more experiential way.

In the afternoon tea and during dinner, people socialized and took advantage of the little time to meet more people. The group initially had about 240 people, 10% left for various reasons. But still it was a large group.

At evening on the last session we did the purification practice of Vajrasattva, which at the same time was a small introduction to the tantric practices of Tibetan Buddhism.

When we came to the subject of Shamatha practice, which means development of single-pointed attention, or calm-abiding. Ven. Alisa asked me to give a talk to the group on this topic telling them about my experience in retreat and giving them practical advice. Many people told me that it helped them a lot and later some people asked me questions about their practice, I was glad to be able to support them and advise them about their plans for retreat.

At the end of the course, Lama Zopa Rinpoche arrived and gave us teachings on the themes of emptiness, the development of bodhicitta (the mind of awakening), etc. He was wonderful, his way of speaking and his personality reminded me of Yoda from Star Wars, a character that was actually based on Tibetan teachers. There is no doubt that Lama Zopa is a wise, loving and compassionate teacher.

The penultimate day we went as a group to visit the Stupas of Swayambu and Boudha. A Stupa is a monument that symbolizes the body, speech and mind of a Budha, so it is said that circumambulating these has much merit while reciting mantras or reflecting on a subject of the teachings. 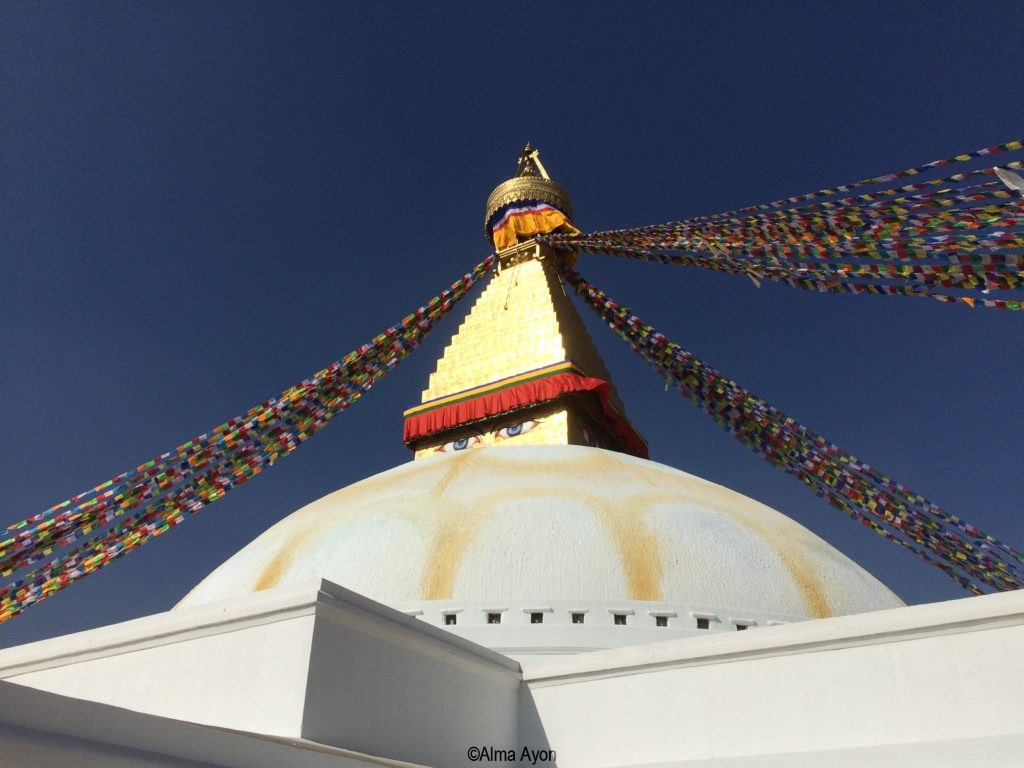 At the end of the course, we had a great closing celebration with dances and Tibetan music, some members of the group also sang a funny adaptation of the song "Let It Be" by the Beatles. The monastery prepared a delicious meal that we enjoyed outdoors. 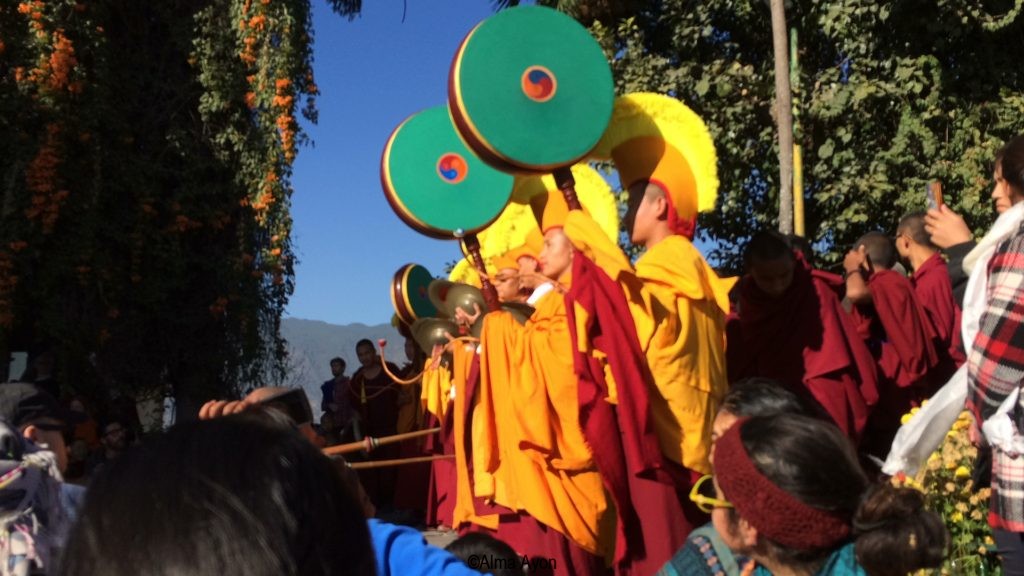 In the end the group was considerably reduced and we had one more week of silent retreat dedicated to meditating on each one of the topics seen during the course. 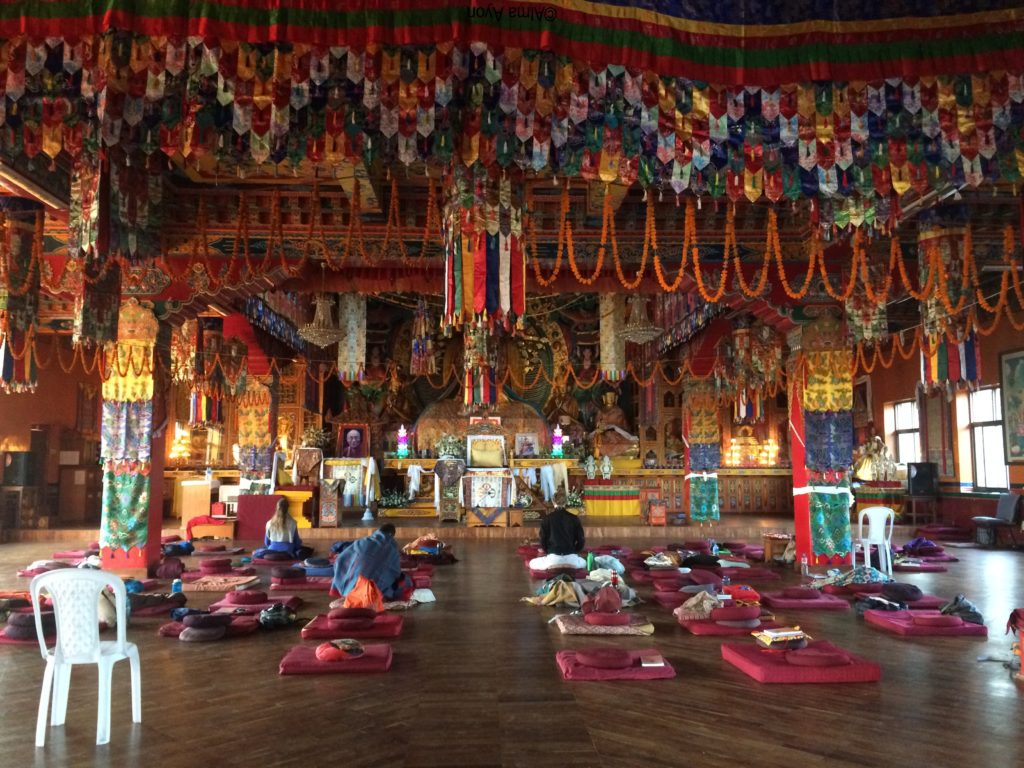 In general it was a very nice experience. I highly recommend you take this one-month course, if you have the interest to explore the tradition of Tibetan Buddhism in a traditional way in a monastery. But I don't recommend it if you do not like rituals and are looking for a meditation retreat with a secular approach.

I also advise you to read a little about the Gelug lineage of Tibetan Buddhism before deciding on this retreat, since the approach is one of study and analytical reasoning.

If you have questions leave them in the comments below and I will gladly answer them.

Earthquake in Mexico: how can we help?

I woke up this morning and found my iPhone full of messages from my family and friends, first I began to see some photos of disasters and then I saw a building collapsed in the center of the city where I grew up, in that moment I realized that something horrible had happened. While I was sleeping a magnitude 7.1 earthquake struck Mexico City, my birth-town, the City of Cuernavaca where I grew up and the City of Puebla where I lived and studied university. The three states are united by the great Volcano Popocatepetl, who has given me beautiful sunrises and sunsets.

I have family and friends in all three states. Everyone is afraid of more tremors coming.

So far Cuernavaca has the highest number of deaths from the earthquake.

A close friend and her daughter are injured today and lost everything, as the building where they lived, Torre Latinoamericana, collapsed completely (see photo below).

On the road that connects Mexico City with Cuernavaca, which I have traveled on countless occasions by car and bus, a bridge collapsed, the pavement opened and giant stones fell.

There are several videos circulating, which show the falling of buildings in Mexico City these are the ones that shocked me the most.

Puebla, one of the most beautiful cities of Mexico, also was terribly affected.

Returning to my city Cuernavaca, it gave me great sadness to see the damage on the Cortés Palace and the Cathedral, the two most beautiful and historic buildings we have.

The same day, 32 years ago September 19, 1985, Mexicans experienced a mega-earthquake that destroyed much of Mexico City and I remember it took years to rebuild it and for people to recover emotionally. I also remember many people who were homeless and frightened moved to live in Cuernavaca, I remember that we received a family in our house while they found a place to live. The teachers in the schools were afraid and made us practice again and again the drills in case of trembling. It was an event that affected us all in many ways. And now… we will have to live all of that over again.

I feel sad for Mexico. It is a beautiful country with wonderful people, historyand traditional towns but it also has people who do us much harm, like narcos, corrupt politicians, thieves, policemen who don’t do their work, etc. We Mexicans have suffered a lot because of this type of people who don’t love their country and their people. It is not only sad to see my family and friends frightened day by day. Now also in this month two earthquakes have manifested, generating even more suffering.

Right now all the attention is focused on Mexico City but Cuernavaca City has the highest number of deaths from the earthquake. I want to ask the world for help for my city. There are many people and many organizations helping and doing well, but there are other corrupt ones that you can not trust. So I am collecting donations from friends all over the world and I will make sure they get to the people who need it.

So much is required such as medications, baby and adult food, blankets, diapers, etc. Your donation can bring these things to the victims of the earthquake.

You can donate now, by PayPal or by credit card on this link (PayPal should appear connected to this email address: psmindfulness@yahoo.com)

If you want to help us, please share this article and donate if you can do it. Thanks, your help is appreciated.

Many of you don’t know me but some of you know that I have practiced and taught for many years the Buddha’s teaching of living an ethical way of life and for the benefit of others.

If you want to connect with me and my projects:
Websites: ayon.me contemplarte.org/en/ dreamlike.us
Twitter
YouTube -Meditation and Yoga
YouTube-Travels and Art

I've studied with several teachers, Tibetan, Western, Zen, Theravada. In this photo I am with my teacher Chokyi Nyima Rinpoche in Nepal.

My main teacher is Alan Wallace, who is a disciple of the Dalai Lama, from whom I have received teachings too.

Alan is a scientist who studies consciousness and emotions. He was a monk and he's is one of the great thinkers of our century. The Dalai Lama is my ultimate role model, he is someone full of compassion and love for all beings, it shows when a teacher doesn't cling to his ego and he is one of the few ones that give us this example.

This is a video of Alan (subtitled in Spanish) where you can see him talking about emotional and mental balance.

Another of my Tibetan teachers, Mingyur Rinpoche 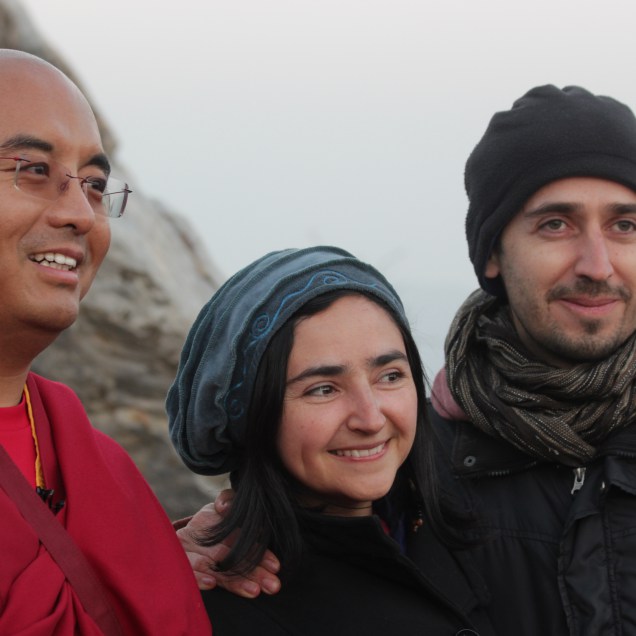 Here with my brother and Mingyur Rinpoche at Volture's Peak, India. 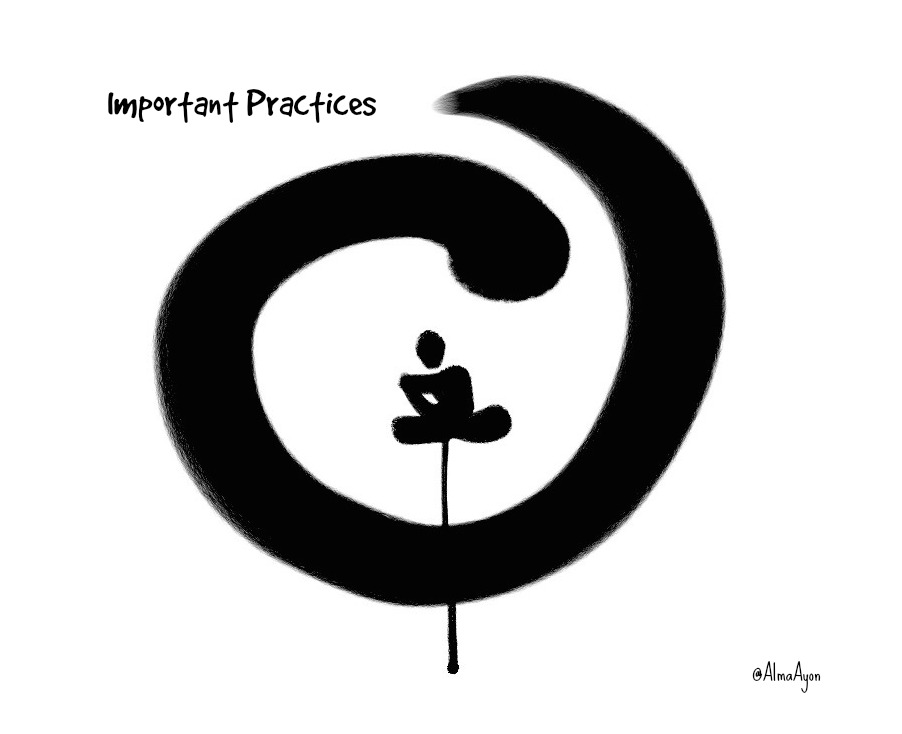